Learn all your competitors’ secrets about the fitness niche creatives that work on YouTube.

Ever wondered what are the secrets of catching people’s attention and getting them to want your product or service? In this blog post, we’ll give you all your competitors’ secrets about the creatives that work on YouTube.

Even if your product has nothing to do with fitness, even if you hate the gym and your daily breakfast is a meat burrito dipped in Skittles... don’t worry. There’s still a ton you can learn here too.

When you look at a whole niche, you start to see patterns of success. If you know what to look for in an ad (and thanks to VidTao you have the tools to find it), then you can do the same for your niche, and apply the ideas that are working for others to your own ads.

So, come on lazybones, put down that bagel and pick up those dumbbells. It’s time to lift up the shirt of the fitness niche and see how the best are turning chiseled abs into cold hard cash with amazing YouTube campaigns.

Who is the biggest seller when it comes to the fitness niche on YouTube?

Now this is a tough question...

We’re not just saying this to point out the obvious. It’s important because when you get one brand that is so successful, you can see how much it influences its competitors.

This demonstrates our main point: take what’s working from the competition and apply it to your own ads.

Traditional advertising emphasizes having your own message and identity but that is much less true with direct response ads. If you reach a very high level of scale, then your branding may come into play, but initially, you just need to find an angle that converts and a way to frame that angle.

If your competitor has already proved an angle that really works, that’s an excellent starting point to use.

Just look at what Vshred has been doing: 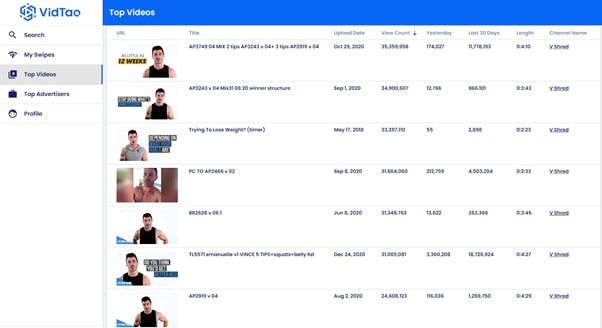 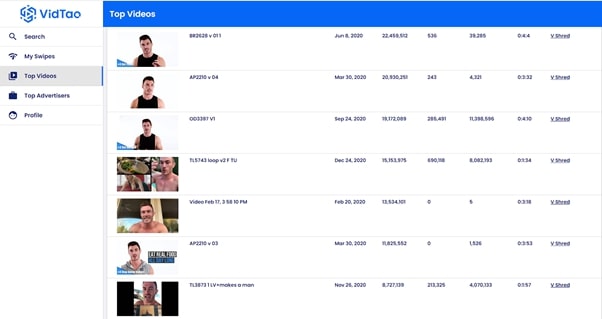 Not finished yet, there’s still more: 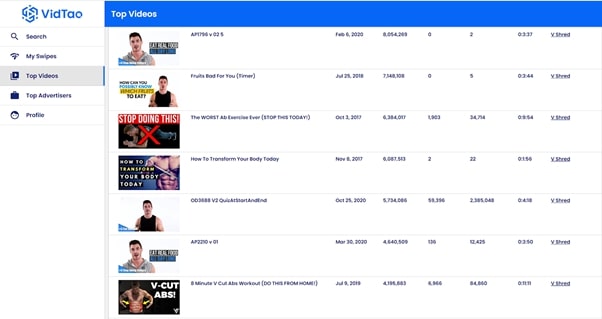 We wanted to put this all in as screenshots from VidTao because this account is, to be honest, ridiculously amazing. We had to turn to spreadsheets to show you because there is simply too much in there.

So, let’s just look at everything launched from 2020 onwards: 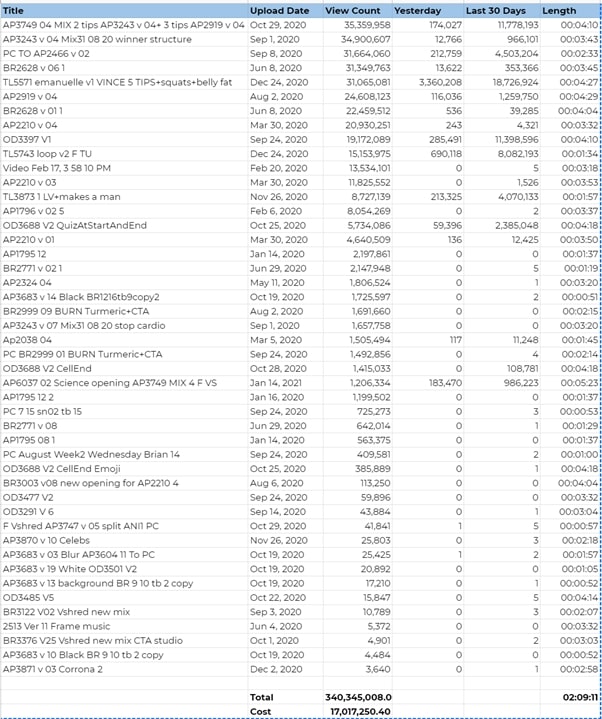 A million views cost advertisers about $50K with the average cost per view at $0.05.

On top of that, fitness is often a more expensive niche because you’re competing with the global sportswear giants like Nike and Adidas, as well as sports media, all of which love YouTube.

So, in the last year, VShred has uploaded over 2 hours of ads, with a total view count of almost 350 million. The most conservative estimate for VShred’s cost for this is $17 million. It could easily be double that or more.

To put that into perspective, there are plenty of agencies out there who are running YouTube ads for 20-30 brands in a year, and they wouldn’t even get close to the lowest estimate in ad spend.

For another perspective, it’s this many moneys: 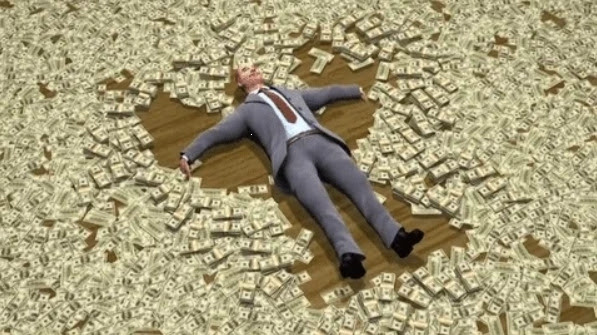 If we go in and look at the top ads of the last year, we see that many of them have the same core ad. They have experimented with length and different hooks at the beginning but the ad is basically the same.

You’d be amazed how well this works.

If you have a slightly longer ad, you can stop it from getting ad fatigue by just tweaking a little bit at the beginning. It also helps you to customize it for a different audience.

And then you can see they’ve added a short UGC (user generated content) style hook with a woman. They most likely use this for a female audience and the one above to men.

They’re giving you different products too.

If you look at the Call to Action (CTA) of this ad, they are sending you to a webinar, whereas the ones above send you to a quiz.

So it’s not just different ads and audiences, they also have multiple funnels going.

When we look at the competitor ads, we see that most of them have taken the approach that VShred has proved and simply applied it to their own brand.

Here’s the basic summary of what happens in a VShred ad:

They often open with an exercise.

This is pretty obvious for this niche since it immediately makes it clear what the ad will talk about.

We all like seeing attractive people working out - that’s been an advertising fact since the 50s. But the motion is also useful...

Your eyes pay more attention to fast movement than a slow shot of someone just talking.

They tip a sacred cow. They take a commonly held belief or idea and challenge it.

In this case, they take the most obvious things that everyone believes about weight loss:

They tell you that one or both of those are not true.

It’s a challenge to your beliefs.

You keep watching to find out why they would claim that something you’re certain is true, is in fact, false, especially with the bait that there could be an easier way.

The core of the ad is educational and mostly focuses on misconceptions about diet and exercise.

The interesting thing here is that there is very little in the ad about the presenter and his credibility or even about VShred as a product. He builds his credibility through information, rather than through big claims.

This is a good reminder that no matter what your niche is, your ad is selling the next step in the funnel.

If it’s a sales page then, of course, you need to explain the product, but if it’s a longer funnel, you just need to persuade them to continue. You’re not asking them to buy anything yet, you’re building value.

The CTA, or Call to Action, for VShred is mostly to fill out a body type quiz, but they also have ads to get you to watch another video or sign up for a webinar.

So there’s the general summary of VShred’s ads.

Now let’s compare them to the rest of the competition:

Does this seem familiar? If you swapped her out for the VShred guy, could you even tell the ads apart?

Who can blame her?

There’s no copyright on an angle. If it sells one workout program it can sell another.

We're sure that the differences appear once you go further into her funnel but this ad hook is basically word for word the same. The addition of UGC (user generated content) is smart too.

Here’s another one in Portuguese, for the Brazilian market:

Google Translate gives us this for the Hook:

“Do you know what number one people commit when they try to define thebelly looks? And has great chance of you have already tried this exercises?

Sit-ups is and Carol

But this is a mistake is yes and I'll explain the reason i think here with meit may be that you have already killed to do from the end did there 300 ofonly once participated in some challenge.”

We don’t know who Carol is, but we think we can all see this is just pure Rio De VShred.

So, just copy the VShred script?

The angle clearly works and we can see that audiences really respond to people challenging commonly held beliefs about losing weight, especially when they offer an easier way to ripped abs.

But the visual presentation matters too.

The guy in the next video has some pretty good credibility. He’s a certified coach and won Mr. Ontario... but the terrible presentation and the boring pitch to the camera completely undermine his message.

Fitness gives you the perfect excuse to have lots of movement, lots of attractive people, and plenty of energy. You’re crazy not to use these things if they’re right in front of you.

The VShred model is clearly a winner but that doesn’t mean there are no other options.

There are a couple of very successful ads that used a little comedy and some interesting visuals to get the message across.

As the script in this ad is not that strong, this is probably working for 2 other reasons.

The secret trick to making ads more watchable is movement.

Your brain is wired to pay attention to moving objects. It’s how all animals spot prey or predators.

So it’s always good to be on the move. Even if you can’t walk and talk, moving your arms and being physically expressive helps.

Russell Brunson does a good thing when he’s selling books where he holds it up and shakes it at you the whole time he’s talking.

You can also use animation or motion graphic text and icons to get some kind of motion on the screen. As a rule of thumb, you want something to be moving at least every 2 seconds.

This Tapp Brothers ad did well last year, using a touch of comedy.

You’ll notice that the hook still uses the same concept as VShred - they’re tipping a sacred cow. While VShred talks about cardio and diet, the presenter here makes you wonder why his plank is incorrect.

It looks fine to us, so we want to know what is the insider knowledge about this exercise.

Even though the angle is different and they’ve made more of a comedy ad, they have framed everything in the same way as VShred.

Even though the angle is different and they’ve made more of a comedy ad, they have framed everything in the same way as VShred.

Diet and exercise are hard so we all want to believe there is a much easier way to get what we want, without the effort.

You can apply this to so many other industries. Even if you’re selling something very different, this way of framing the angle has a massive amount of potential.

Right, that’s enough sweat and muscles for the day. We're probably going to regret all this research when we spend the next two weeks being targeted by ads for protein shakes and 8 minutes abs...