If your offer isn’t appealing, if your ad copy / messaging isn’t on point for your audience, it doesn’t matter how much you spend on fancy production, actors, etc. Your ads won’t work.

Good creative is the #1 challenge to scaling profitably with YouTube ads.

We’ve been talking a lot about creative fatigue and how to beat it. And we’ve also been discussing what exactly makes a high performance YouTube ad creative in the first place.

Want to see one “lean” way to quickly build & test new YouTube ad creatives, so you can identify winning ad concepts as quickly (and cost effectively) as possible?

Ever heard this expression?

If your offer isn’t appealing, if your ad copy / messaging isn’t on point for your audience, it doesn’t matter how much you spend on fancy production, actors, etc. Your ads won’t work.

So how can you quickly discover the winning messaging for your ad?

Test messaging first by using the lean production methods we're about to describe. Use one consistent video format. And with all other variables the same, discover which messaging gets the best results.

With that data in hand, then go ahead and iterate on it with more involved production methods, as you continue to scale.

Let’s see this approach in action.

Take a look inside of the VidTao database, and you’ll see one company who has been doing a great job of “lean” testing, iterating, and scaling on YouTube, called Sales Mentor.

Here is their process in nutshell:

Using this approach they have no doubt generated multiple 7 figures with their YouTube ads.

We are going to walk through a couple live examples from inside the VidTao platform to show you their approach in action:

Version 1.0 is all about getting data on ad messaging with as little time / production investment as possible.

See this simple PowerPoint + voice over example from Sales Mentor, launched in May 2020: 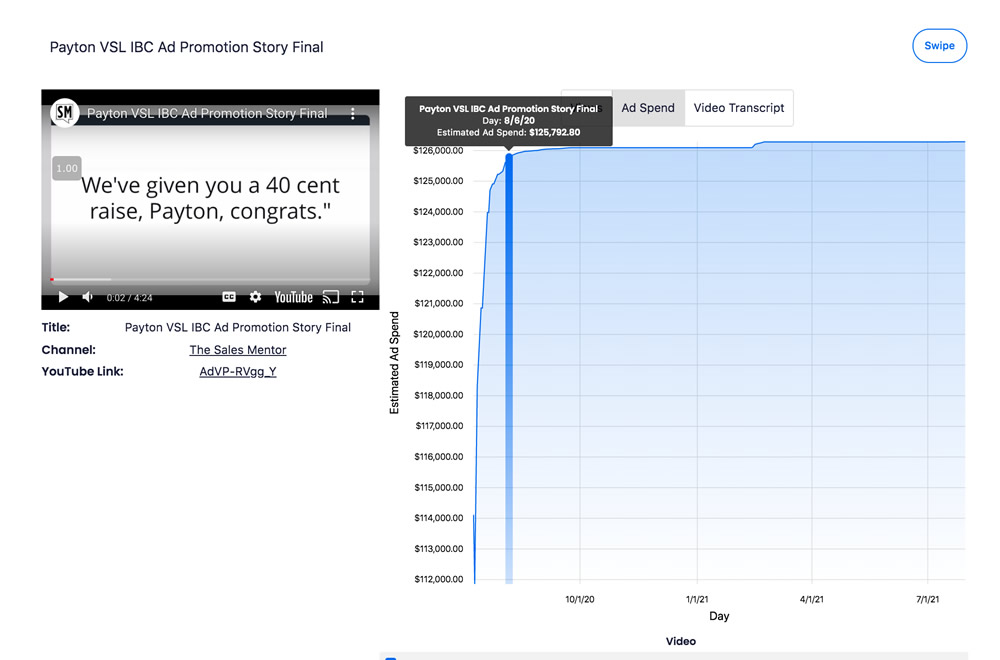 Watch the video and you’ll see:

But check the results. They spent over $100k on this ad, before suddenly stopping spend on it around August 11, 2020.

Why did they stop using this ad?

Because their version 2.0 of this ad (launched mid July 2020) started beating the original.

And what exactly is the version 2.0 of this ad all about? Let’s take a look…

After Sales Mentor saw success with version 1.0 of this ad, they launched version 2.0:

What’s different about the ad from Version 1.0?

When it comes to the ad copy itself, absolutely nothing. Take a look: 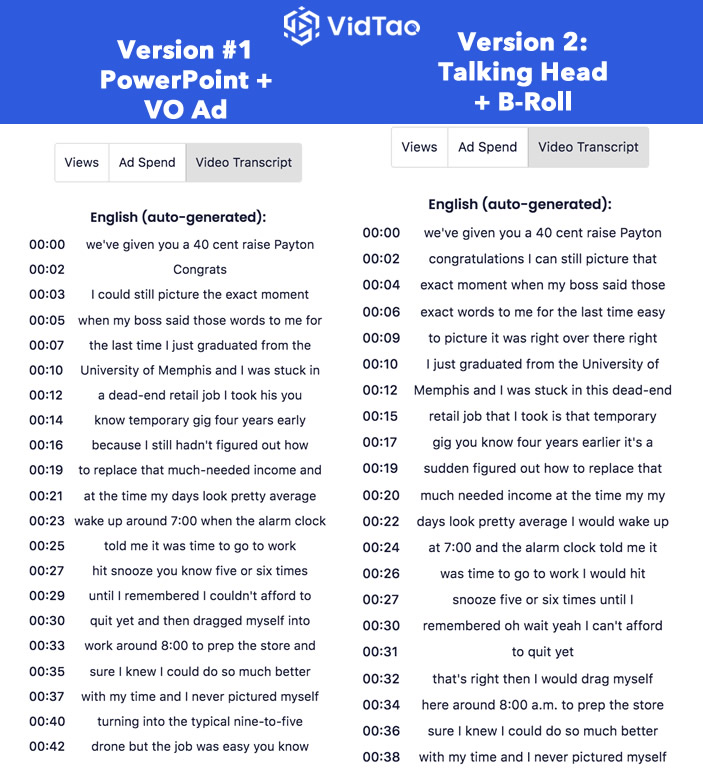 But instead of a text-only PowerPoint visuals, the new version incorporates the spokesperson (Peyton) on-camera with a bluescreened background: 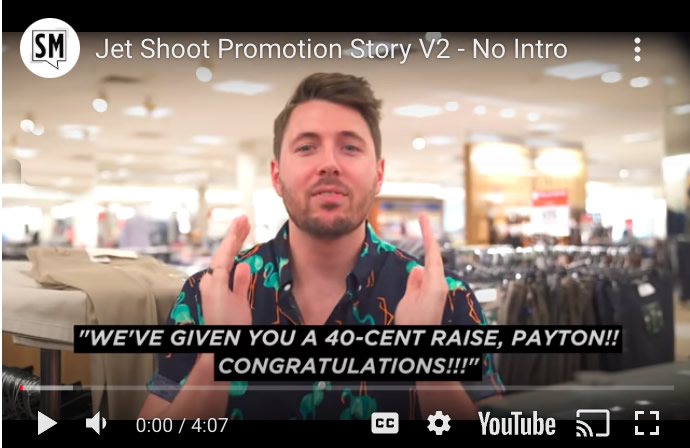 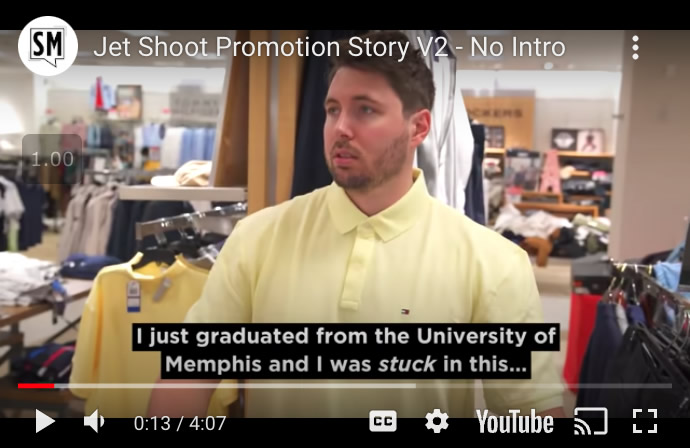 Sales Mentor’s spend on this Version 2.0 of this ad is approaching 7 figures: 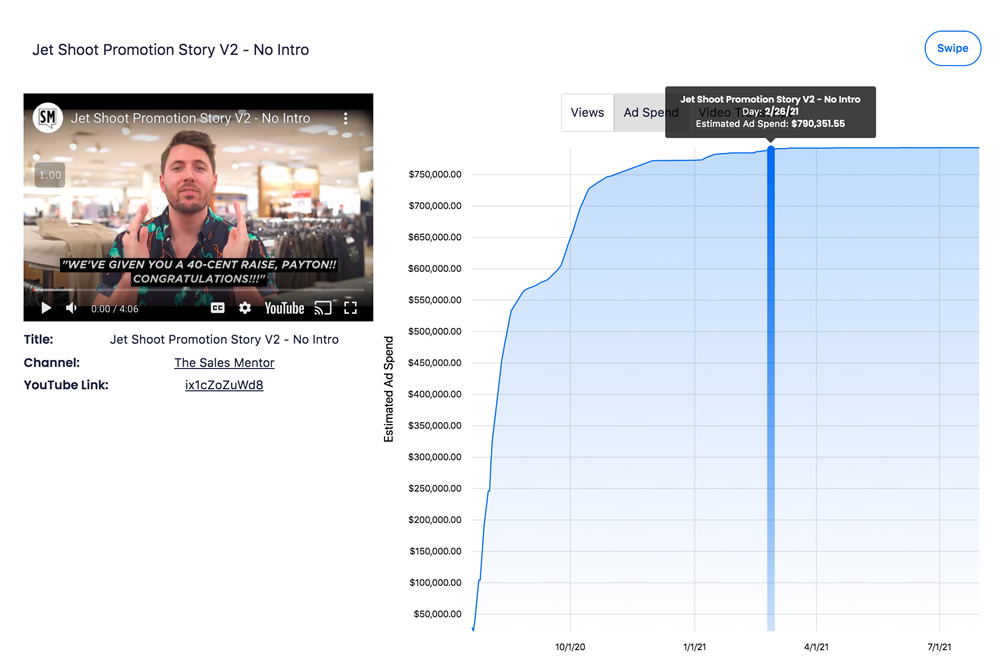 What about “Lean” ads for other verticals?

PowerPoint +  voice over can definitely work for “lean” testing information product ads. But what about eCommerce and other spaces? Have you seen any good examples of quick-to-produce / cheap production eCommerce ads for example?