🎯 How to include a delayed effect of your marketing activities into your model in the simplest possible way.

After we introduced you to the world of Marketing Mix Modeling in Part 1 of the series of VidTao Tracking & Attribution articles, and after we showed you How to do modeling in Part 2, now it's time to move on to Part 3 with Inceptly's data analyst Dobroslav Slijepcevic.

But… Doesn't the effect of advertisements last longer than a day or a week?

Let us imagine… You are sitting in your favorite armchair and watching some great movie on TV, “Avengers: End Game”, for example, and suddenly, the advertising block begins. Maybe you don’t like watching a bunch of ads instead of your favorite movie, but you don’t have a choice 🙂 And, the fist in your face, a new collection of “Avengers” figures is on sale, exclusively in the official Marvel store in your neighborhood at a special price just for one month! You want to buy the action figures, but, unfortunately, your payment day is three weeks away and you don’t have the money to buy them immediately. You are a patient person who doesn’t want to spend your savings and you are waiting.

In the meantime, you have seen the ad ten more times, and finally, at payday, you buy the new collection of Avengers action figures. Your happiness is unmeasurable, but what the marketing manager would need to do to measure the impact of marketing activities on you?

We are human beings, we remember things. So, it’s completely wrong not to incorporate in our models the time period while the ad yet lives in our brains! Of course, the impact of ads is the strongest when we see, read or hear them, but we can also think about them later and they can drive our behavior as customers for weeks after the initial contact with ads. Hence, the question is, how to include this time period of the delayed impacts of ads in our calculations?

These are the questions I’ll try to answer in this chapter. In the previous article, I used linear regression to model the impact of each marketing channel on our Imagined Company revenue. But, if you have read carefully, each week’s ad spend had an impact only on revenue achieved in that week. And now, I want to integrate the cases described in the previous two paragraphs into our model. How to do that? The answer is in one single word: ADSTOCK - the measure of carry-over and lag effect of marketing activities!

I have no intention of bothering you about who coined the term and about all historical stories, you can easily find these facts somewhere else. I will only guide you on how to include a delayed effect of your marketing activities into your model in the simplest possible way. The process is simple, let us suppose that 40% (or 0.4, which is called ‘adstock rate’) of our advertising activities are carried over from one week to another. Then, if I spent $1,000 in the first week, I expect the impact of $400 to be carried over to the next week, and the impact of $160 to be carried over to the third week, etc. 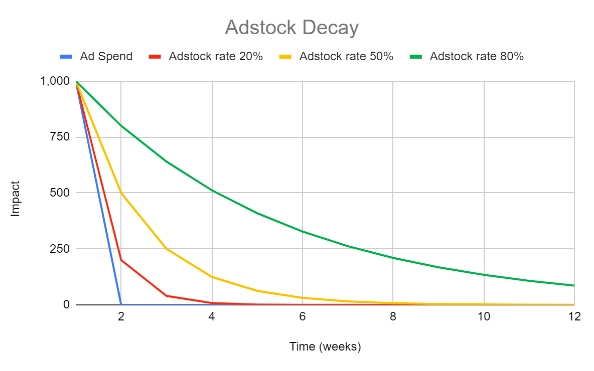 OK, it looks great, but one thing is not clear. Why would we stop spending on advertising after week one? A more common situation is that we continue to spend on marketing activities. What to do then? Let us suppose that we spent $1,000 on ads every week. How to do adstock transformations in that case?

The procedure is described in the following steps (with the adstock rate of 0.8):

The t denotes the ordinal of the time period (day, week, month…), and A is adstock, transformed spend variable.

The tabular view and the appropriate chart are given below: 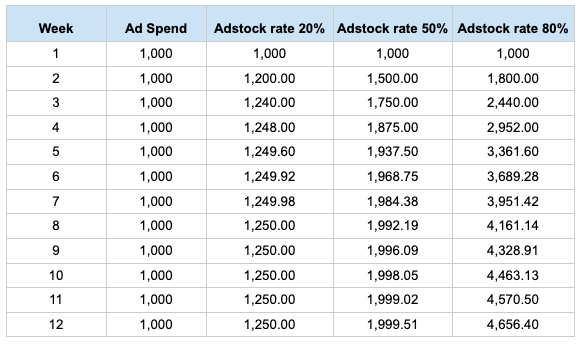 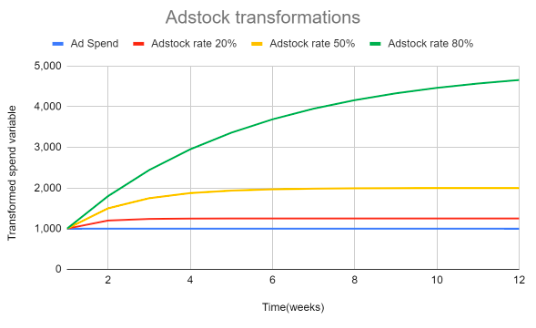 Let us consider our simulated dataset again, and try to repeat all steps from the MMM part 2, but this time, with adstock transformations of Google spend, Facebook spend and TV spend with independent adstock rates. How to guess the real adstock rates for all of the media? Adstock rates for digital media are usually smaller, about (0.0-0.3), while adstock rates for TV are highest (0.3-0.8). I’ll set the initial adstock rate for Google and Facebook to be 0.15, and 0.50 for TV. We shall see if we need to change these rates and why.

Let us compare the first 10 rows of our variables before and after the transformation: 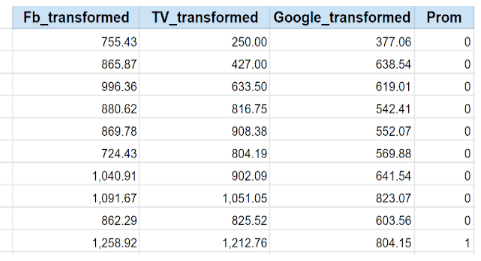 And, as we can see, transformed variables are generally higher than untransformed spends (except the first row!) Again, the picture(s) tell(s) us more: 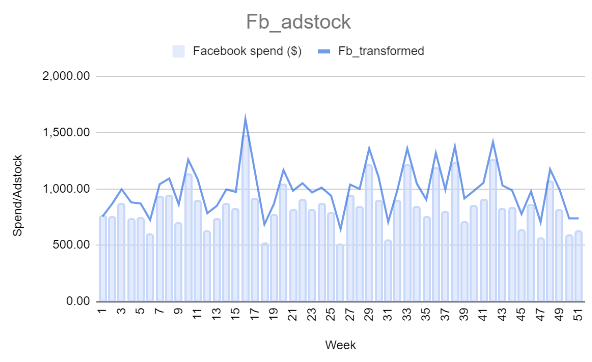 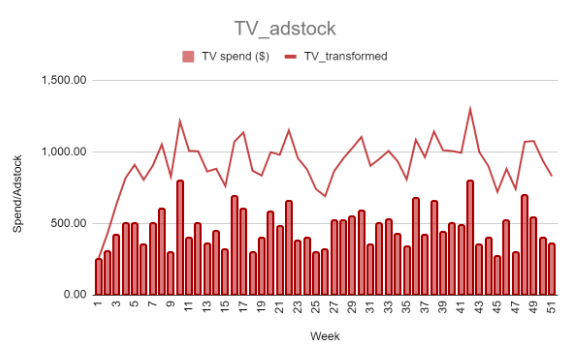 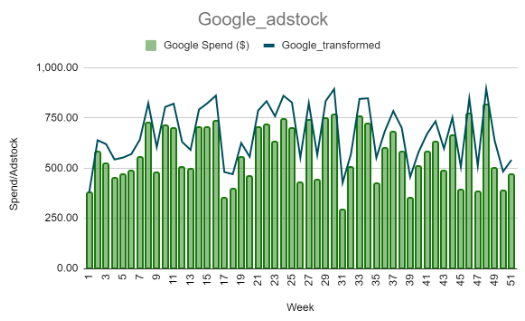 As we could expect, the TV variable has changed the most, since its adstock rate is set to be the highest - 50%, and the impact of the first week is spread over the more than 10 next weeks.

Back on the modeling, again

In comparison with the model with row spends, R-squared is higher (0.92), which is good because it is one measure of accuracy. Also, I calculated one more indicator of accuracy - MAPE, which is equal to 3.9% - lower than the prior model. We want lower errors! Also, the baseline is significantly lower, from $4,700 which is reduced to about $1,870. Its contribution is partly attributed to our marketing channels with spending, which is a much more likely situation, there is no sense to assume that advertising impact has to be instantaneous.

In the next table, you can read the distribution of the revenues generated by all variables:

Each of the spend variables increases its effect share in comparison to the prior model, TV even doubled its impact on the revenue (16%), since it has the highest adstock rate! Facebook generated nearly 45% of the total revenue, and Google videos generated 26%. ROI of each spend channel is given by:

which can be shown through the following charts: 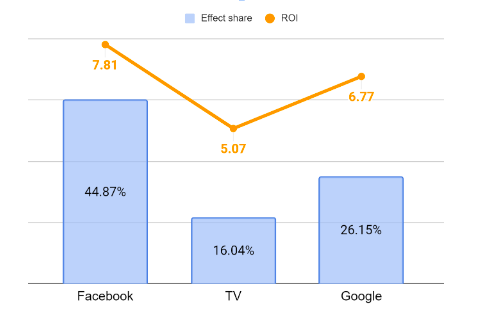 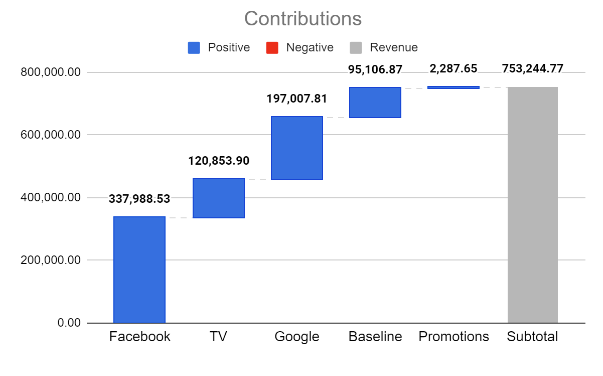 Most of our revenue is driven by marketing activities, adstock helped us to estimate the contribution of each channel better! And at the end, we have an actual/predicted chart, where we can see that the new model better explains dips and spikes in our revenue, with a MAPE of only about 4%! 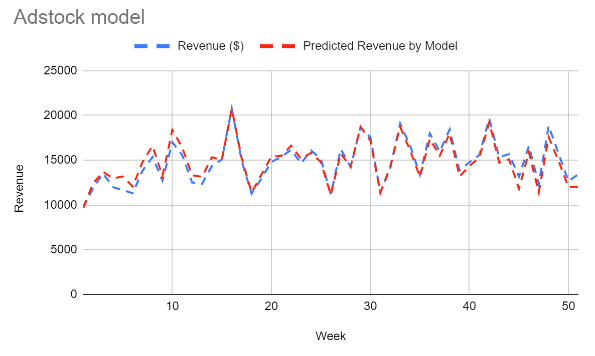 Honestly, no, not even close… Many questions are still open. Among the most important ones are:

In the next chapter, I’ll try to answer the first question, at least. All of the questions require a deep understanding of statistics and machine learning concepts, but one old wise says (attributed to Albert Einstein, but I really doubt he said that):

” If you can't explain it simply, you don't understand it well enough”!

Have a nice day!