We want to show you how this company found a promising angle and then kept tweaking it until they had the perfect ad.

Today we’re going to do something a little different.

Instead of analyzing a single ad for arthritis treatment, we’re going to show you how this company found a promising angle and then kept tweaking it until they had the perfect ad.

This account shows the incredible results you can get using a patient and methodical creative process, where you make small changes to a winning idea rather than throwing new ideas up at random. 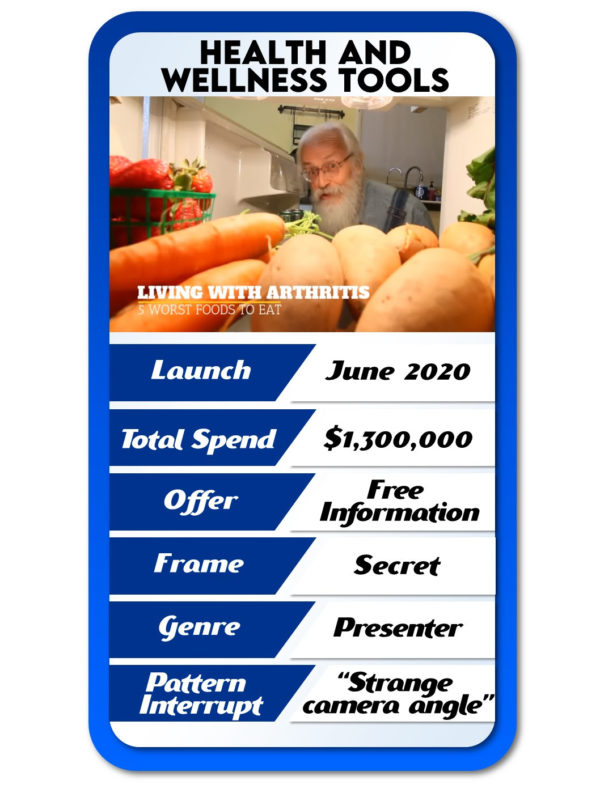 Why is the ad so good?

The ad works because they found an angle that really resonates with the audience and then, through testing, they found the perfect way to frame and present this angle.

You might first notice that they found a charming, likable presenter who will resonate with their audience. However, we have to look at this ad in the context of the other ads they ran to see that the presenter is just one small piece of the puzzle.

The frame is a secret about the five foods that make arthritis worse. The ad gives a very small amount of information around this idea without revealing any of the five foods.

This drives a lot of curiosity, which is one of the most reliable ways to increase your CTR for a webinar funnel. You don’t need to sell people on the product, you need to sell them on the webinar.

Curiosity is one of the best ways to do that by teasing the audience. We don’t like unanswered questions, no matter what the subject.

That’s why clickbait is so effective: haven’t we all clicked on some stupid list article titled “Which celebrities have famous parents” or something like that.

Once you see the question, you feel a need to find the answer. This is what you want to play with for ads leading to webinars. Don’t clickbait - you don’t get conversions by deceiving people - but teasing people with the answer is a great tactic.

This is a presenter ad but the script is designed to make it feel more like UGC (user generated content) as the presenter talks in the first person about his own experience.

He may actually be a real customer, but it’s more likely this is an actor.

The setting is very homely with a messy kitchen, and they picked a presenter who looks like a regular person. No smart clothes or new haircuts, just a regular joe. This creates a sense of trust, making it feel more like a testimonial than an ad.

* Note: We actually loved this presenter so much that we spend half a day going full Sherlock Holmes to track him down and use him in some of our ads. A lovely man.

I really like this opening because it uses just the camera to give an interesting and original opening. Most of the time, when people try to come up with pattern interrupts, they focus on bigger, bolder, more in-your-face ideas.

But getting your target’s attention can be as simple as an unusual camera angle.

The opening shot from inside the fridge looking out is not complicated to set up but it separates this ad from the millions of others that start with someone in a room, talking to the camera. The fridge in the shot makes your brain do a little more work to process what’s going on, and that’s how you grab attention.

Cinematography does not need to be big and expensive to be good. A touch of creativity can go a long way here, as the bar is very low in most ads. Most people stick the camera in front of them and never think about it again, which is a huge waste.

We covered this above in the Frame. Free Information offers don’t need to push hard on pain points and objections, that’s the job of the next steps in the funnel.

Normally in Ad of the Week, this is where we compare a competitor ad from what we’ve found on VidTao. But it will be more valuable to look at the evolution of the ads for this product from Health and Wellness Tools instead.

VidTao is showing us 14 ads that launched over a year from September 2019 to September 2020. 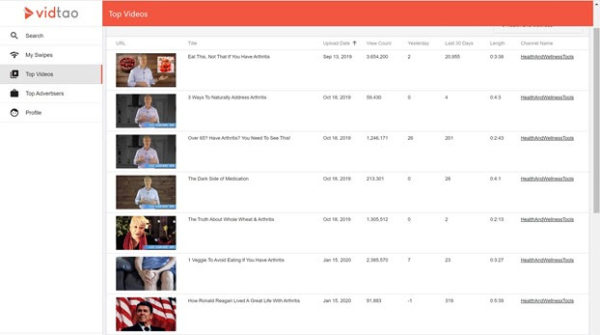 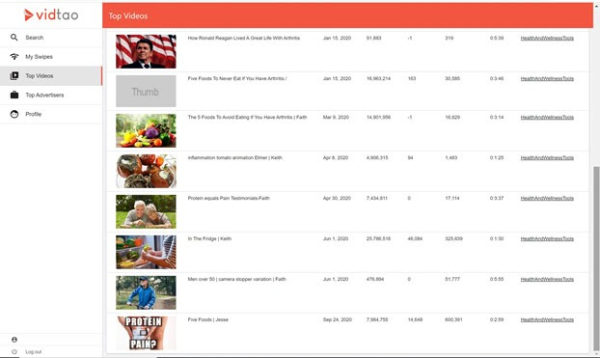 First, we have this one: 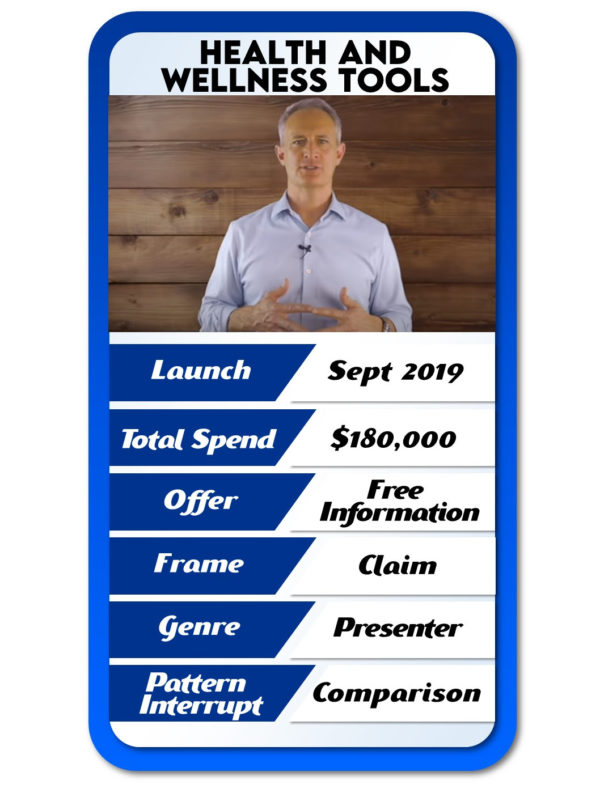 They already have the angle in place when they launched this ad and it worked well enough for them to scale it to around $180,000 in ad spend.

Most advertisers would have been very pleased with this and may think the job was done, but there were more opportunities to scale in this audience.

Just a month later they used the same presenter and made a very similar ad but with a different angle.

The focus is no longer on food, it’s much more general. And it didn’t work.

From the same shoot, they created a script that was pretty close to the September ad.

The initial hook doesn’t focus on food. It’s more general and takes over 10 seconds to bring up the concept of “5 foods you should never eat.”

The ad scaled to around $60,000 in spend, so it must have been converting, but it wasn’t getting the same results as the first ad.

Health and Wellness Tools made the right conclusion here: their food angle was the clear winner. Now they had to find the best way to frame and present it.

In January 2020, they launched this ad that opened with a razor-sharp focus on their winning angle. The first line is “Today I’m going to show you the 5 foods you must avoid eating if you have arthritis.” 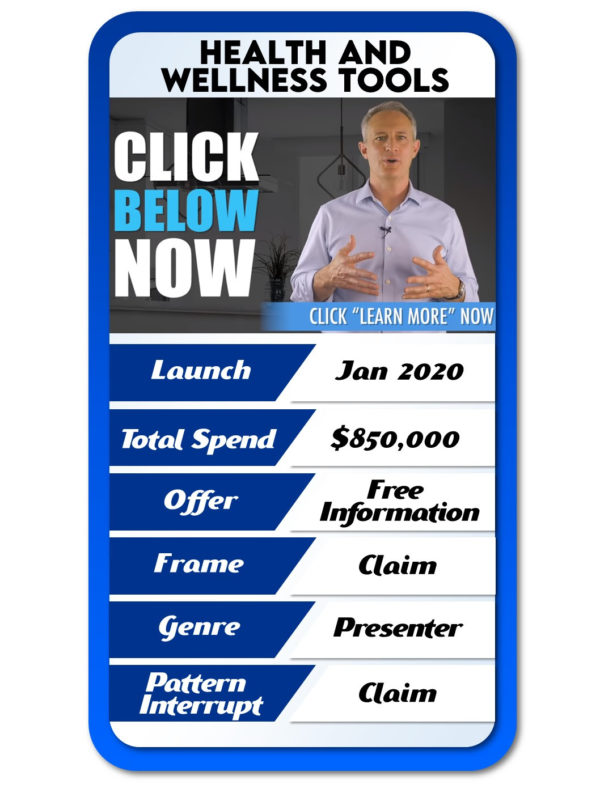 He opens with this big claim about these five foods. Then he uses the ad to reveal one of them, which is tomatoes. This puts the ad halfway between a claim and a secret as he does reveal one of the foods and backs up his claim on why you should avoid it.

The ad was a huge success and they actually shot the same exact script with a female presenter that scaled to the same level. They almost certainly ran a different one to male and female audiences.

By the time they made our ad of the week in Jun 2020, they already knew they had an almost perfect ad. And yet they were able to unlock even more scale. They weren’t far off doubling it. Although the charming presenter may have been a part of it, along with an interesting pattern interrupt by putting the camera in the fridge, the key was changing the frame from a claim to a secret.

With a shorter, tighter ad, that gave away almost nothing, and the audience was forced to click if they wanted to find out any of the 5 foods. This got the most traffic possible to the webinar to let it do the converting.

Finding a winning ad is not easy but the biggest sin you can make as an advertiser is to waste that once you do find it.

If you have a winner, you need to be logical and methodical about what you test next. If you throw up another idea at random, you will learn absolutely nothing and have to start from scratch. This is the time to change one or two variables at a time to see what moves the dial.

That’s not to say you can’t also test brand new ideas because you never know what’s going to work. However, most of your focus should be on improving the success of your winning ads.