This week we’re looking at a no-nonsense e-commerce product that is doing extremely well on YouTube. It’s a solar battery used to charge phones, tablets, and laptops. It comes from a brand called 4Patriots in the survival niche.

This week we’re looking at a no-nonsense e-commerce product that is doing extremely well on YouTube. It’s a solar battery used to charge phones, tablets, and laptops. It comes from a brand called 4Patriots in the survival niche.

If you don’t know much about this niche, it covers quite a wide range of people. From those that are campers and outdoor enthusiasts to those known as “preppers”, who are loading up in case the apocalypse arrives. Or, maybe apocalypse 2, now that 2020 is over.

These guys understand their audience to perfection. Not only in their advertising but in the product selection too.

So, here’s the creative breakdown: 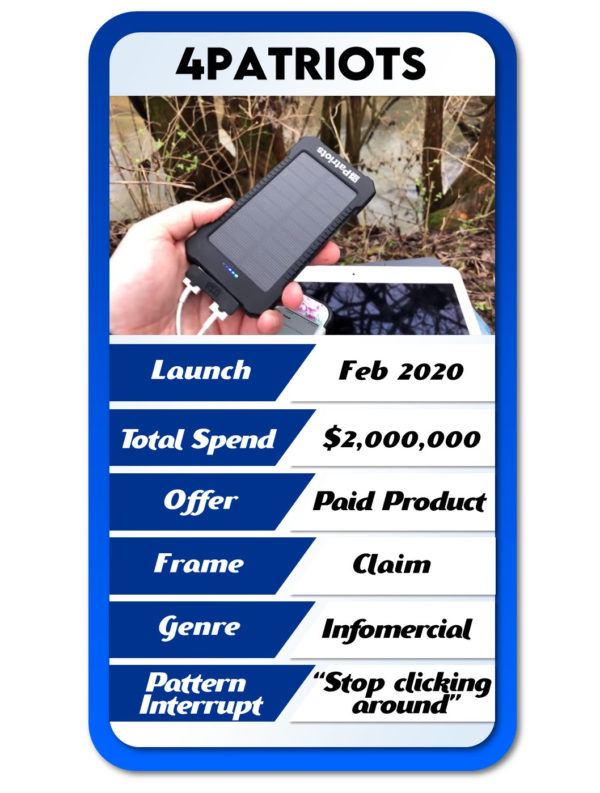 => A quick note: We’ve combined 2 ads to make these figures. The first ad launched in Feb 2020 and has 16 million views and this ad launched in August 2020 and has 25 million views. But it’s the same ad with a small tweak made around one specific claim about cloudy skies. In the more recent ad, they’ve taken out this claim in multiple places, so it’s about 20 seconds shorter.

Why is the ad so good?

The ad works because it has done two things very well.

1. It proves that the product works.

This is an old-school infomercial, where they talk you through what the product does and then show it in action. You might not see the battery charge all that much but seeing the no-nonsense demonstration makes it very credible. This is especially true out in the mud and dirt to prove it’s robust.

2. They made the tone and the content exactly what their target audience wants.

Just think about how outdoor people would describe themselves:

... and so on. That’s why this ad skips all the hype and the big claims, making the case in very basic terms.

All the structure of a direct response ad is still there as they define the audience, explain the benefits, make the offer, add urgency, etc. They also cut out anything that made it feel like a typical ad.

You could almost mistake this for a review by a customer. He’s added to that feeling by a very unglamorous shot by a river, rather than some fancy cinematography.

There is also another visual element that is working too. It’s much less obvious and they might not have planned it. This ad should be incredibly boring to look at since it’s just his hand holding the charger for 4 minutes. It’s not exactly Bad Boys 2.

So why do you keep watching the screen?

It’s because his hand is always moving.

It worked in the old ad too. The shot never changes but he keeps wagging this object in your face. It’s enough to stop your brain from getting bored.

The frame is a simple claim.

Avoid running out of battery ever again, no matter what kind of situation you end up in. This fits the whole tone he’s going for of being simple and to the point.

If he’d picked any other frame - such as a secret, a story, or a problem-solution - then it would automatically make it feel more like an ad and less like a review.

It’s a voiceover, but to be honest, it’s a presenter ad without his face in it.

Typically, you can see him on camera in other 4Patriot ads. Most likely, this shot is the best way to get a good view of the product and to do the demonstration, rather than anything else.

He tells us to “stop clicking around”, and again, he’s playing to his audience with his no-nonsense approach.

He’s like a serious dad who wants to give you some basic advice. He may as well be saying “now listen up kids!”.

It’s a paid product so you go straight to the sales page. He pushes a lot on the value of having more than one charger in the ad. The landing page is only a few technical details and then you choose how many you want to buy.

For anyone that goes to the sales page, he’ll likely run retargeting for some of his other products. Since he has a very clear customer avatar, it’s likely they will want a range of other products in this survivalist niche.

That’s what we would suggest anyway.

It’s hard to find a direct competitor for this right now. A company called Lit used to have a similar product but all their ads are set to private now. There may have been some legal change they had to make about certain claims. Or it could be many other reasons.

Let’s look at a guy in the same survivalist niche, Jason Hanson:

Jason caters to the same audience, but pushes a lot more on the dramatic end of things. He is often pushing the angle of fear and security.

In this ad, he makes a lot of big claims about himself and it’s much more of a sales-like language, even though he is targeting a very similar audience.

Since you’d expect his audience to be 90% Republican, we're not sure “New York Times Bestseller” is a positive to the people he’s targeting. 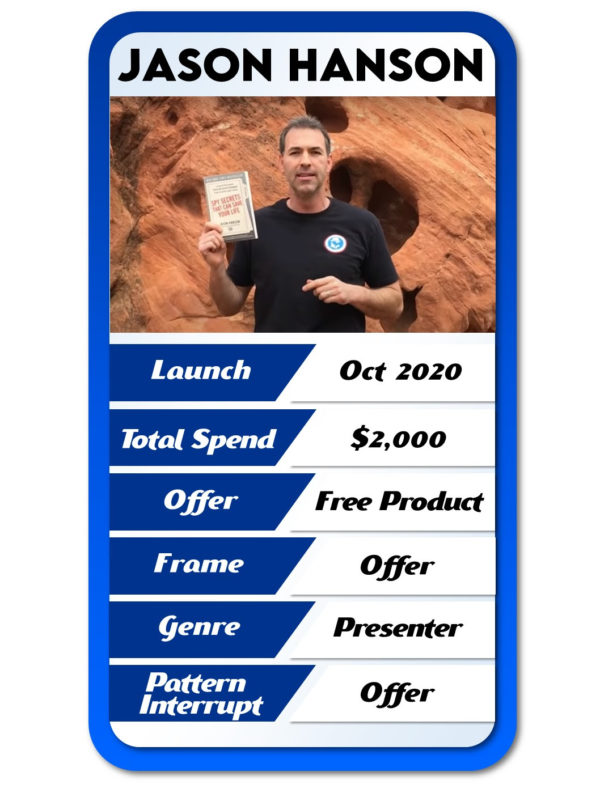 It’s not fair to compare the products and the offer here as they are very different funnels.

Though, you can’t help but feel that focusing on the value in the book, rather than on himself, would make this ad work a lot better for this audience. The 4Patriots no-nonsense style has proved this over and over again.

Too often advertisers make the ad and then try to find an audience it works for.

But if you have a clear customer avatar, then you have a very good starting point for how to make the creative ad.

If you make the same power bank and sell it to tech people in a city, then it’s likely this creative ad would fall completely flat. Even though the product is simple and universal, the audience wouldn’t feel like it was for them. 4Patriots know exactly who they are selling to and everything they do feeds into that.